SAT 7/16 (9:30AM) — The playoff brackets will be posted shortly, so you can see the next progression of matchups. Sorry for the delay. As you can tell from the Bird’s Eye page, it’s been a rough week.

TUE 7/5 (10:45AM) — Playoffs will start this Sun 7/10 with the Monstars from AAA-OAK joining the playoffs. They had lost every AAA-OAK game by an average of 20+ ppg. That means we have 11 teams and we will just automatically give the Monstars the 11th seed. It doesn’t matter all that much since everyone gets double-elimination status anyways.

As stated a few times in the past, sometimes the standings grid can be a little off, since it only sorts by W-L PCT then alphabetical. There are no playoff seeding tiebreakers inherent in the grid. So here is the official final standings, listed out in terms of seeds…

First off, we’ve always taken the top teams from each conference as the #1 and #2 seeds, to spice things up a bit. This is how the NBA did it when they only had two divisions in their conferences. The rest of the tiebreakers are pretty straightforward and follow the NFL rules, which of course are based on a limited number of games (16), as compared to the complexities of the NBA tiebreaker system, which is based on 82 games.

In general terms, the NFL tiebreaker system is as follows: (1) head-to-head, (2) record vs common opponents, and (3) the so-called “strength-of-victory”.

So I hope that explains the seedings above. Any questions, email Wylie. So, here are the matchups for 7/10. Please note, if you are seeded #6 thru #11 and you win your first game, you will have a second game (a doubleheader)…

Brackets will be posted next week as this natural migration away from standings and to the playoff bracket takes place.

FRI 6/10 (1:15PM) — The following are the current standings from 2011 Spring-Summer, A/R-OAK division. These are simply ordered by W-L percentage then alphabetically, and therefore are not necessarily shown in the proper playoff tiebreaker order. That will be corrected when we reach the playoffs and the seeds are posted. 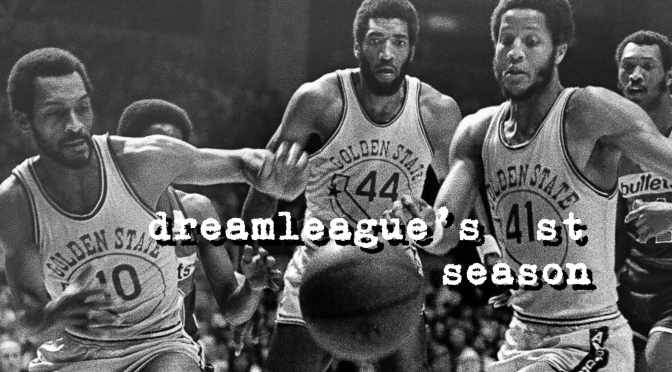 NOTE: Deadline to make a request is 11:59p on the Tuesday before that Sunday's game!

...or email the Commish at info(at)dreamleague(dot)org

There was an error retrieving images from Instagram. An attempt will be remade in a few minutes.